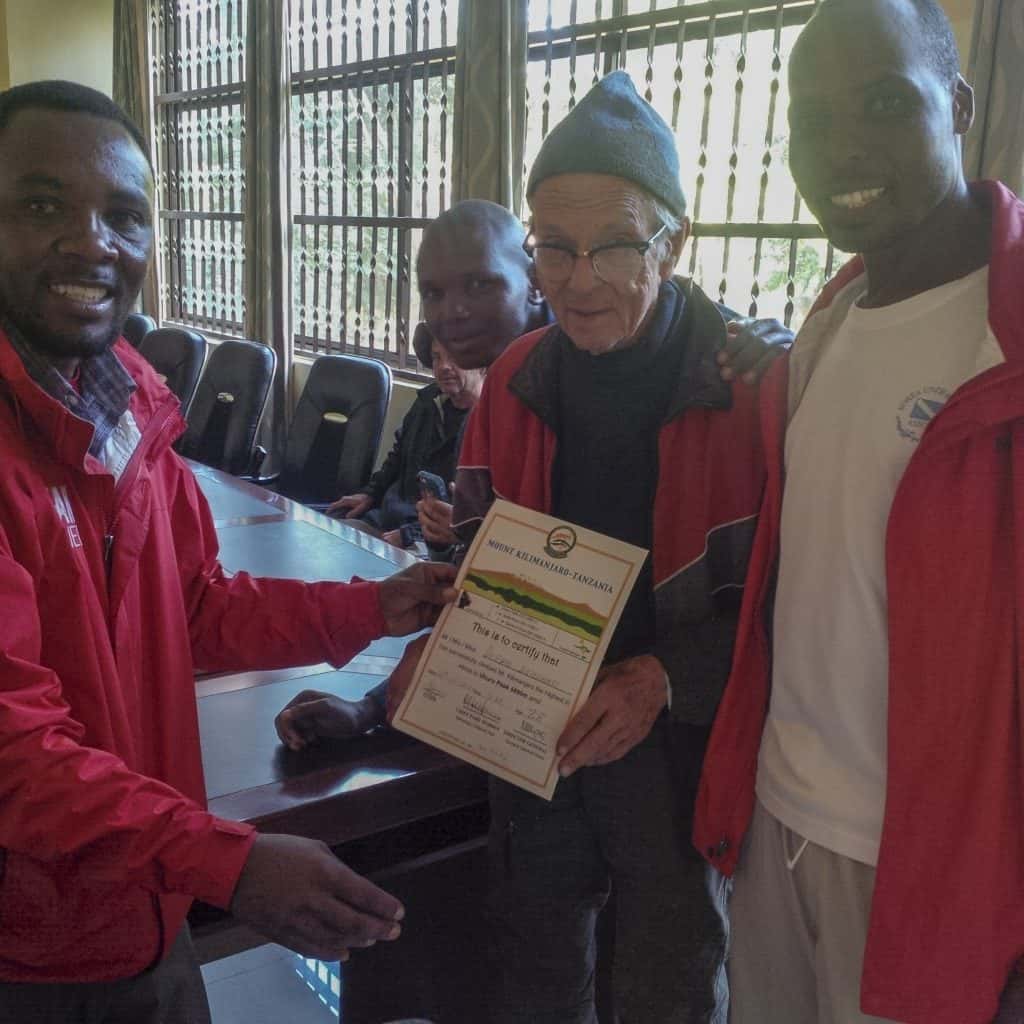 “It wasn’t such a big deal. I was surprised it wasn’t harder,” he said, smiling.

It was his granddaughter’s idea.

When he got to the top, he took out a Coors beer can — empty because they won’t let you pack alcoholic beverages onto the mountain.

His granddaughter, Ellen Edgerton, was already in Tanzania volunteering with Bob Bandoni’s Shoulder to Shoulder program. He got an email from her saying, “I just signed you up to climb Mount Kilimanjaro.”

PRIMA’S IN HIS PRIME

He stays fit. He rides his bike. He still skis more than 100 days a year and finishes with a Prima/Pronto/Logchute.

He took a warmup stroll up Quandary Peak near Breckenridge and jumped on a plane to Dallas, another to London, another to Nairobi and flew to the mountain the next day with his granddaughter.

“Around here, we have lots of mountains. Kilimanjaro is out there all by itself. I started asking, ‘You mean we’re going up that thing?’” he said.

And they did, the same way you do anything: “One step at a time,” he said.

Mt. Kilimanjaro is one of the Seven Summits — the highest peaks on each of the seven continents. It rises 19,361 feet above sea level, the world’s tallest freestanding mountain, with eight different routes to the top. As many as 30,000 people a year climb it.

“When you sign in at the bottom, hundreds and hundreds are there. But once you start to climb, you don’t see much of anyone,” he said.

“When we saw Fred, we were a bit afraid,” said lead guide Davis Assey, of Peak Planet, the service that led Fred to the top.

People along the trek questioned whether Fred could make it to the summit — 50 percent don’t, Assey said. Altitude sickness gets to most of them.

“We could hear other clients and guides talking about it, some with excitement, others with doubt,” Assey said.

The guides kept an eye on him with health checks twice daily, measuring Distelhorst’s pulse and oxygen saturation, as well as his temperature and blood pressure.

“We carefully monitored his health throughout the climb, as we do with all of our clients on the mountain. The readings confirmed what we knew from visual observation — that he was performing quite well,” said Dana Wentzel, Peak Planet’s executive director.

“We quickly learned that while he is old, he is stronger than even the youngest and most fit in the group,” Assey said.

Dr. Steve Yarberry, Distelhorst’s physician, insisted he use oxygen for the final ascent on the summit. He was a little fussy about it until he cranked it on.

“I was ready to go to the moon. I think there was more than oxygen in that little tank,” he said.

There were nine climbers and four guides.

“We were treated like royalty. They bring you tea in the morning, make your breakfast and off you go.”

Distelhorst climbed on the remote Rongai route on the northeastern part of the mountain, near the Kenyan border. The team left high camp at 11:38 p.m. July 19, and reached the summit at 9:33 a.m. on July 20.

“As you climb, the sun comes up. It’s all the way up when you reach the top. Spectacular,” he said.

Yes, it’s on the other side of the world, and it’s worth every minute and every mile.

Overall, the entire climb took six days. Climbing was four or five hours a day. Coming down was 16 hours a day for two days, Distelhorst said.

Assey said he was proud to guide the oldest man to climb Kilimanjaro.

“When he arrived at the summit, word spread across the mountain and every guide and porter was proud to know that Dr. Fred made it, even at 88 years. It was an honor and a pleasure to hike with him,” Assay said.

The people, Distelhorst said, are his most treasured memory.

“I was most impressed by the people. The Swahili are so nice. They were so friendly. Other than the view from the top, that’s what impressed me most,” he said.