Safety is the most important aspect of your climb.

The truth is every single year, climbers die on Mount Kilimanjaro. Due to its extreme altitude, climbing Kilimanjaro can be quite dangerous if one is not properly monitored and treated. Above all, at Peak Planet, we are focused on safety of each and every client. We understand that first and foremost, it is our main responsibility to keep everyone out of harm’s way.

We have many layers of safety built into our operations to minimize the risks on Kilimanjaro. No other climbing company provides such a comprehensive safety program.

What is altitude sickness?

Altitude sickness, also known as Acute Mountain Sickness (AMS), is a negative health effect of high altitude caused by the failure of the body to adapt quickly enough to the reduced level of oxygen in the air. Altitude sickness generally develops at elevations higher than 8,000 feet and when the rate of ascent exceeds 1,000 feet per day. The elevation gains on some days during your Kilimanjaro trek fall into this category. Therefore it is likely that you will experience some form of mild altitude sickness on Mount Kilimanjaro.

The most common of altitude sickness are headaches, sleep disturbance, fatigue, shortness of breath and dizziness. These can be considered normal for climbing Kilimanjaro. However, complications can develop on Kilimanjaro, and everyone attempting to climb the mountain must be aware of the risks involved. The symptoms of altitude sickness generally appear within hours of moving to higher altitudes and vary depending on the severity of your condition.

Mild forms of altitude sickness are best treated by rest, maintaining fluid intake, and by a painkiller such as paracetamol. Mild symptoms which have lasted for 24 hours or more can be treated with Diamox which aids acclimatization. Some people start taking Diamox before the climb to prevent AMS as prescribed by their doctor. Alternatively, it can be used as a treatment for AMS once symptoms have arisen. The use of Diamox is a personal decision but we do recommend you bring it in case you need it.

Serious cases of altitude sickness can only be treated by immediate descent. Severe cases of acute mountain sickness can cause more intense symptoms, affecting your heart, lungs, muscles, and nervous system. This occurs rarely develops for climbers. However, these conditions can lead rapidly to death unless immediate descent is made. 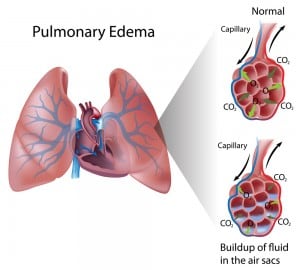 High altitude pulmonary edema (HAPE) is an advanced form of altitude sickness caused by fluid build up in the lungs. This is caused when some blood vessels in the lungs become constricted due to altitude, and the blood pressure in the vessels results in a high-pressure leak of fluid into the lungs. Pulmonary edema is characterized by crackling noises from the chest and the coughing up of pink sputum.

High altitude cerebral edema (HACE) is an advanced form of altitude sickness caused by fluid leakage from the brain. The cause is possibly due to an increase in cerebral blood flow due to increased permeability of cerebral endothelium at high altitude. Cerebral edema is recognized by severe headaches combined with a severe loss of balance, dizziness, and confusion.

Incidences of altitude sickness can be minimized or avoided altogether be taking the proper steps in while planning your climb and while on the mountain.

First, we encourage our clients to select Kilimanjaro routes that are lengthy and have favorable acclimatization profiles. Due to the time on the trail and the nature of these routes, occurrences of serious altitude sickness for our clients is very low. Furthermore, we have established four primary steps to help our clients achieve successful acclimatization on the mountain.

Frequency of Symptoms of Altitude Sickness

Mild Altitude Sickness symptoms may include:

Severe altitude sickness symptoms may include:

Our guides have extensive experience in the field. They climb Kilimanjaro around 20 times per year and have been leading climbs for many years. Therefore they have literally handled thousands of clients and are experts in altitude-related illnesses.

Peak Planet guides are skilled at preventing, detecting and treating altitude sickness. Every single guide is certified as a Wilderness First Responder – the Western industry standard for professional guides. Wilderness First Responders take comprehensive and practical coursework in medical training, leadership, and critical thinking. For that reason, our guides have knowledge of the essential principles and the required skills to assess and manage medical problems in isolated and extreme environments.

During the low season, extensive multi-day training courses are held off-site to reevaluate and refresh their knowledge of first aid and rescue. These courses reassure that our guides are well prepared for any situation they encounter.

Monitoring one’s pulse and oxygen saturation twice per day gives our guides additional insight into a client’s health. We start by giving a health check at the trip briefing. This gives us a baseline to work with. We log these results and compare them each day at our health checks.

We also take regular temperature and blood pressure readings, and we listen to your heart and lungs with a stethoscope.

We carry emergency oxygen on all climbs

It is quite common for climbers to have a mild form of altitude sickness. However, our guides can recognize the symptoms of more serious altitude sickness and know how and when to treat a climber. If necessary, our guides will organize an immediate descent, which is by far the quickest and best treatment. Most often an ill climber will recover very well just by descending a few thousand feet, with no further treatment needed. We will use a portable stretcher in cases where the climber is unable to walk on their own.

We carry emergency oxygen and medical kits on all climbs. Administering oxygen is very effective in treating altitude related symptoms. Peak Planet is one of only a few Kilimanjaro operators that offer ALTOX Personal Oxygen Systems. ALTOX is designed to aid climbers on their ascent of Mount Kilimanjaro. It can eliminate most if not all of the symptoms of altitude illness, in the process it can greatly improving your chances of a successful summit and making it a far more pleasurable experience.

Our medical training is based on western practices

We are partnered with IFREMMONT, a European-based High Altitude Medical Training Organization.

IFREMMONT is a highly respected organization that has been training guides in the Alps since 2005. They are the most qualified high-altitude medical doctors in the world. As a result, our medical training and safety protocols are based on IFREMMONT’s established guidelines for first aid and mountain medicine. Our guides learn how to treat specific illnesses that can come from high-altitude conditions. Most noteworthy, they know how to handle all types of emergencies on the mountain, including rescue and evacuation.

All clients are covered by emergency helicopter rescue

In rare situations where evacuation on foot or stretcher is insufficient, our staff will dispatch a medical helicopter to transport the stricken climber to a hospital. We have found Kilimanjaro Search & Rescue to be a highly capable, professional response team with the experience and commitment to respond to all search and rescue emergencies. Their rescue team is on standby and can be airborne within minutes of receiving a distress call.

We communicate with our guides using satellite GPS

Garmin’s inReach Explorer is a handheld communication device. Using this device, we can locate our trekking parties and communicate with our guides in real time using a satellite network. One device is carried by a guide for every group we have on the mountain and are enabled with live tracking so we know exactly where our clients are at all times. This is practical information that we obtain for day to day reporting, but the real value comes if we need to coordinate rescue and evacuation with other staff, the park service or Kilimanjaro Search & Rescue (helicopter service).

The Garmin inReach Explorer is durable and reliable. It can be used to initiate a rescue by signaling for help on all parts of the mountain. We believe that being equipped with satellite communication devices adds preparedness and peace of mind for us, our clients, and their families. We are one of the few operators who have this capability.

We have established protocol for handling emergencies

Peak Planet is well prepared to manage crises on Kilimanjaro. We have established protocols for every type of situation and for every location on the mountain. If an emergency were to happen, our teams know exactly what to do, step by step. Other operators, unfortunately, do not have firm plans and as a result are not prepared. Our guides quite often assist other companies when things go awry with their clients.

In cases where emergency evacuation is required, an affected person is escorted on foot or carried upon a stretcher. The descent is made to the highest access point that the national park rescue vehicle or helicopter can reach – either Shira Plateau, below Mandara Hut or Rongai Gate. The rescue vehicle or helicopter will transport the sick or injured client off the mountain to either another rescue vehicle or directly to a hospital via helicopter. This depends on the extent of the injury or sickness. During the rescue, the client is accompanied by one of the guides and looked after carefully.

Depending on where the client went, the morning after the rescue, the guide will meet the client again. Consequently, there is a telephone communication from executive staff to the guide to make sure that the correct medical care is being offered. And that the client’s wishes are being taken care of. This guide is then available to help the client in any way, whether they need to go to the doctor or do a short walk around town.