ount Meru is located in the center of Arusha National Park. It stands at 14,977 feet tall which makes it the second highest peak in Tanzania. And fifth highest in Africa. It makes for a great acclimating hike before you do your Kilimanjaro climb. Meru is a dormant volcano. You will see views of the Ash cone as you ascend to the summit.

Unlike Mount Kilimanjaro, Mount Meru lacks the crowds. This makes for a  peaceful, yet tough climb. In addition to the solitude, you also enjoy sleeping in huts.

Since Meru is located inside Arusha National park you may glimpse a variety of wildlife, including giraffe, zebra, colobus monkeys, leopards and hyenas, in the park’s small but bustling 53 square miles of natural habitats.

For the first day on the mountain, an armed ranger will escort you from gate to camp. This is to prevent poaching of the exotic animals. Depending on your group size, you will also have one of our guides with you as well as a modest mountain crew made up of a chef and several porters.

The trail follows the north rim of Meru’s crater along a stunning ridgeline with views of Kilimanjaro. This trail continues upward on what’s left of the volcanic crater. Once you reach the summit the view of Mount Kilimanjaro and looking down into Meru crater are unforgettable.

Peak Planet offers a private 4-day trek of Mount Meru. It can begin on any date.

You’ll depart Moshi or Arusha for Momella Gate (4,921 ft) in Arusha National Park. Our guide will check you in at the park gate. The trail begins by crossing the grassy savannah. You will be escorted by a park ranger. Since you are in the safari park you may spot giraffe, antelope, zebra, elephant, monkeys, and buffalo. The trail will climb steadily until you reach Miriakamba Huts (8,250 ft).

The morning trek will continue through the rainforest until you reach the Heath zone. You’ll be surrounded by giant heather trees. You’ll continue along the ridge until you reach the saddle. From here, the views of Meru’s crater and the Ash cone are amazing. Once at Saddle Huts (11,712 ft.) you may feel like taking the acclimating hike to Little Mount Meru.

This is summit day. The climb starts around midnight. The trail to Rhino Point is steep. It continues its arduous ascent to Cobra Point. From here, you’ll continue up the steep ridge to the summit—Socialist Peak (14,977 ft.). From the summit, you can watch the sunrise over Tanzania before returning to Miriakamba Huts (8,250 ft.).

This is the final day. The descent is quick going back down to the Momella Gate (4,921 ft.). Our vehicle will be there to drive you back to Moshi or Arusha.

The Routes We Offer 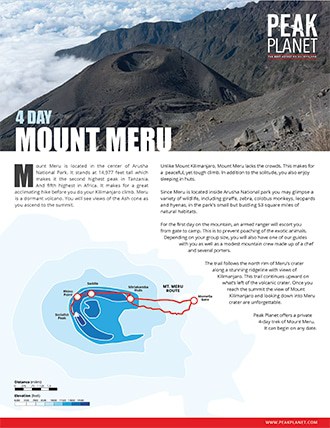