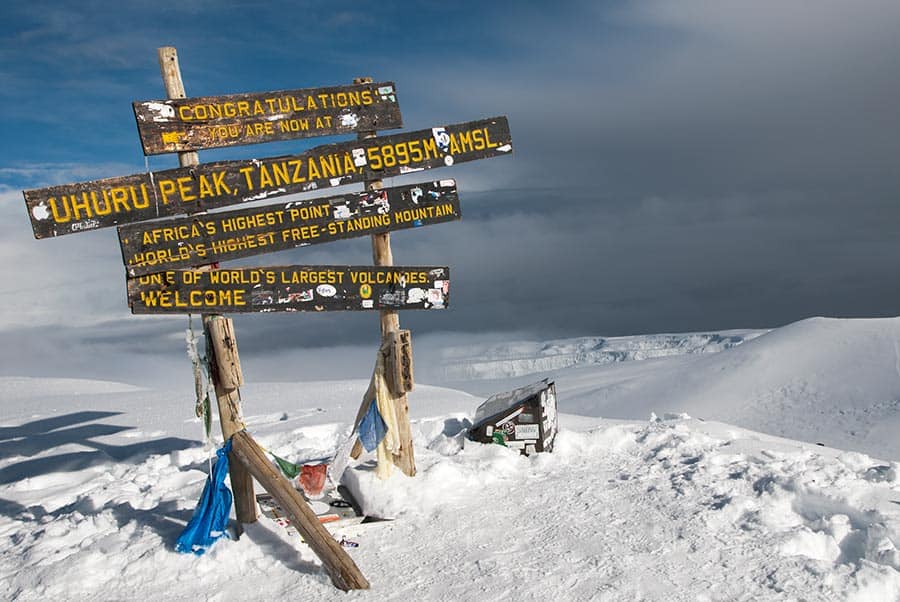 1. Easiest of the Seven Summits.

Mt. Kilimanjaro is technically the easiest to climb of the Seven Summits. You don’t need any mountaineering experience, ropes or technical equipment.  The youngest person to reach the summit was six years old (even though they do not allow children under 10 in the park), and the eldest was 86. That does not mean Mt. Kilimanjaro is free of risk. Rockslides and acute altitude sickness kill ten climbers on average each year.

Mt Kilimanjaro is both remote and accessible. Kilimanjaro is located in the country of Tanzania, just south of the equator, next to the vast Serengeti plains. Regular flights fly nonstop from Europe to the JRO (Kilimanjaro airport). Around the mountain, there’s surprisingly good support infrastructure for an impoverished country—upscale lodging, outfitters, gear to rent, ground transportation, etc. On the mountain, there are established campgrounds with semi-permanent toilets (even though we provide private toilets) along the heavily traveled routes. There are also armies of porters who carry and set up tents and kitchen facilities at each campsite.

Kilimanjaro remains surprisingly free of trash. Conversely, the base camp of Everest is strewn with trash, Kilimanjaro National Park is surprisingly clean. Park Rangers weigh all the bags coming on and off the mountain and trekking companies pay heavy fines if the bags come down light. This greatly reduces dumping on the trail. There are basic outhouses along the way what while far from luxurious, provide privacy and keep the mountain clean. There are only seven trails up to the summit, and no roads. As a result, despite large crowds of travelers, the mountain has retained its wild nature. Disposable water bottles are illegal to carry up the mountain as well.

Mt. Kilimanjaro one of the world’s greatest natural wonders. It is a snow covered mountain set almost right on the equator. It is surrounded by lush rainforest, which in turn is surrounded by vast plains of exotic animals. Climbing Kilimanjaro is like walking from the equator to the North Pole in just a few days. Each day is an adventure both as a climb and with the dramatic changes in vegetation and animal life. Kilimanjaro is also a sky island. Its high altitudes have created habitat for strange and unique life forms found only on a few other peaks on the planet, such as the delicate elephant flower and the bizarre groundsel tree.

Kilimanjaro is a hot spot for studying climate change. Al Gore used photos of its rapidly shrinking glaciers in his documentary An Inconvenient Truth. Ice core samples place the age of the glaciers to be about 11,700 years old. However, they will all be gone in the next 20-30 years. Teams of scientists study the ice extensively to try and understand exactly why this is happening.

The large numbers of people traveling to Tanzania—both to Climbing Kilimanjaro and for safaris—contributes to a thriving local economy. Tourism generates roughly $20 million every year. Guides, porters, cooks, travel and trekking agencies, hotel staff, food producers, merchants, banks and construction companies all create local jobs in a region that remains one of the poorest on earth.

Kilimanjaro inspired a continent to embrace freedom. Kilimanjaro belongs to Tanzania, the first nation in Africa to win independence from colonial powers. Before it gained it’s freedom Tanzania was known as Tanganyika.

In 1959 the soon-to-be President, Julius Nyerere was quoted: “We, the people of Tanganyika, would like to light a candle and put it on the top of Mount Kilimanjaro which would shine beyond our borders giving hope where there was despair, love where there was hate, and dignity where before there was only humiliation.”

Today, the summit is called Uhuru Peak–Uhuru is the Swahili word for “Freedom.”

People climb Kilimanjaro for a variety of reasons. Individuals climb the mountain to mark important transitions such as their graduation, retirement, marriage or a divorce. The event is significant enough that every year dozens of websites write blog posts about a person who made the journey to the peak.

Many people climb Kilimanjaro to draw attention to a worthy cause or charity. Some of the charities help to raise money to cure cancer or bring attention to a condition such as autism or women’s rights. Individuals with disabilities have climbed Kilimanjaro to demonstrate that with courage and perseverance, a disability doesn’t need to stop you.

Kilimanjaro inspires transformation. When you climb Kilimanjaro and stand on the roof of Africa, you see the world in a different way. Problems that seemed impossible in your life before now pale in comparison to climbing Kilimanjaro. The Summit of Kilimanjaro is a truly awe-inspiring place to start a new beginning.