The 86-year old retired school-teacher has not been idle since then.  She’s been to Australia, Fiji, and the Cape of Good Hope, just to name a few of her previous destinations.  But on October 29, 2015, when she reached the summit of Mount Kilimanjaro, Angela finally considered her promise fulfilled.  “October 29 – the day when I went to the Uhuru Peak – was the day of her birth. I dedicated this climb to her.”

Climbing any mountain is no easy task, and the choice of date made things even more difficult.  Angela, her daughter, Vera (62), and the support team accompanying them faced monsoons and other inclement weather on their journey to Africa’s highest peak.  “The first days of our expedition could be called a pleasant stroll.  Then we were hit by the monsoons; they seemed to never end. We were climbing during the day, and at night the guides had to dry all the equipment to have warm clothes in the morning,” she said.  “I had lost my voice, and I couldn’t speak, but to turn back? No, I did not even think about it.”  Determined to honor her sister’s birthday, Angela pushed on.

Despite these hardships, the trip was not without its high points.  “At an altitude of 4,000 meters, we even danced the tango with our guide. And at 5,000 meters we saw the sunrise. Sunrise above the clouds. That’s impressive.”

Perhaps even more impressive was how well Angela handled the climb.  According to her guides, her pulse was 70, and the oxygen concentration in her blood was 89%, which they could only describe as ‘incredible.’  “This showed that she tolerated altitude acclimatization very well,” they said.  The guides even noted that “Angela did not need any first aid kits or oxygen.  She coped perfectly without them.” 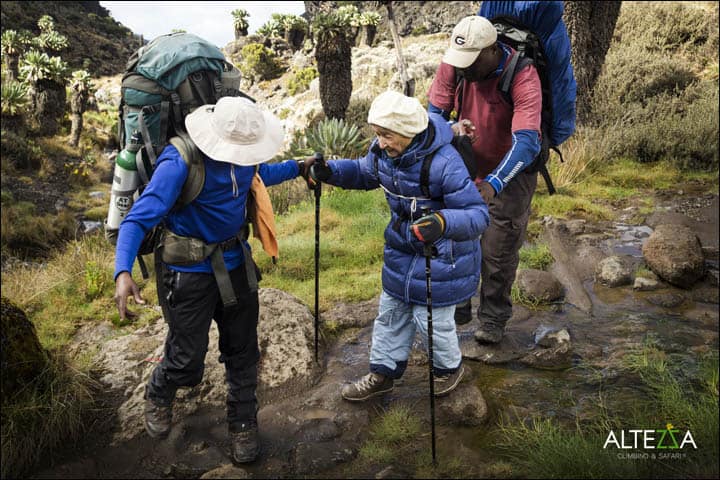 For any readers who may, understandably, assume that the well-traveled school-teacher had any previous training as a mountain climber, prepare to be corrected – her secret is simply staying active.  Angela said, “I’m walking by foot pretty much usually, and there are no problems with blood pressure. I do exercises every morning and pour cold water over myself. I do not have some special training for climbing.”  In fact, this lack of special training was one of the very reasons that she chose Kilimanjaro in the first place: “I love the mountains.  They have always attracted me. And I love Africa, its nature. It is tempting to climb to the highest peak of Africa. Moreover, on the one hand, it is a huge mountain, and on the other – Uhuru Peak is not covered by ice, like Everest or Mount Elbrus, so requires no special climbing skills.”

Upon reaching Uhuru peak, Angela Vorobyova became the oldest person to ever climb Mount Kilimanjaro, and has been officially entered into the Guinness World Records.  But this wasn’t point, Angela said.  “I wasn’t thinking about breaking any records, I just planned to climb it, and that’s it. Now I feel really strange: I climbed, and so what? But everyone made a whole event out of it. It turned out I am indeed a record-breaker!”

Oddly enough, Kilimanjaro was not Angela’s original destination for her 2015 trip.  “At first I wanted to try myself by walking the Inca Trail in Peru from Cusco to Machu Picchu. It is 48 km at an altitude of about 4000 meters. I thought that if cope with this well, I will try to conquer Kilimanjaro. Unfortunately, a trip to Peru this year fell through, and it was decided to go to Tanzania.”  And go to Tanzania she did – all the way to the top of it.  “At the top of Kilimanjaro, we stayed for about an hour,” she said. “The beauty is breathtaking – it seems incredible.”

But Vorobyova isn’t done.  “My next planned trip is, of course, to Peru, Machu Picchu. In addition, I have dream of a cruise from Anadyr – Murmansk, past the Russian islands in the Arctic and the North Pole.”

She’s certainly proved that she can.