Tanzania is made up of 120 tribes of people. Until just a 100 years ago, these tribes were in constant wars with each other. In the region around the base of Mt. Kilimanjaro, there are 15 different tribes. They are combined into one group called the Chagga.

There were three main trails connecting the Chagga territories, each was at a different elevation.  The middle path was almost always the quickest and most maintained, but it was also the most dangerous. It cut through the heart of the Chagga region. If political tensions were high, a traveler may venture down that path, never to return.

Two of the routes on Kilimanjaro – Machame, and Marangu derive their names from these tribes.

Today, the mountain is a much more diverse place. Not only have the clans come together under the umbrella of Chagga identity, members of tribes from all over Tanzania live and work on the mountain. Most of the tribes have blended into modern times. That is except the Maasai. 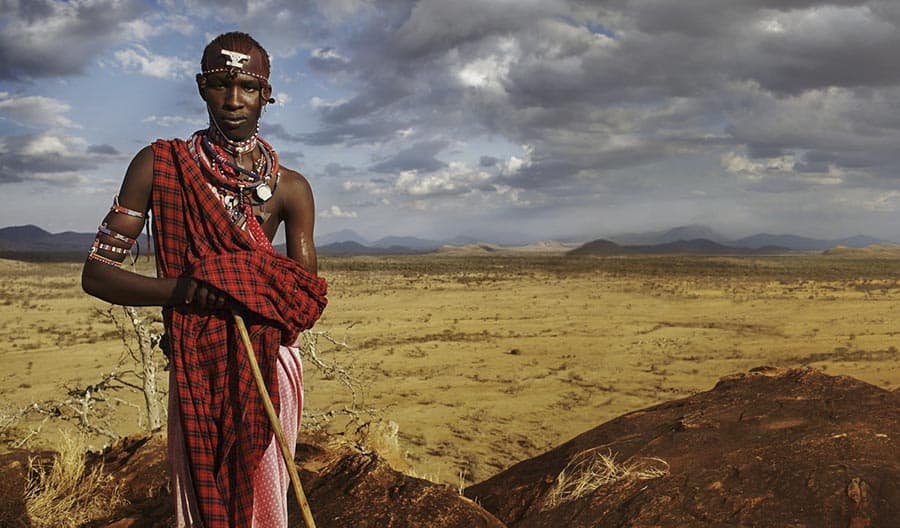 Of all the Tanzanian tribes the most famous are the Maasai. They inhabit southern Kenya and northern Tanzania. The outside world has become aware of them due to their close proximity to the safari parks such as the Ngorongoro Crater and Serengeti. Their brightly colored clothes make them easy to see. The men wear bright striped blankets over their body called a Shúká. They tend to favor red. They also wear cow-skin sandals which can sometimes be seen strapped to old tire tread and they carry a wooden club. The women usually wear bright colored fabrics and have many beaded necklaces and weaves.

The Maasai society is a patriarchal society. The elders, made up of men, decide everything for the tribe. Their law is oral and the exchange of cattle is usually used to solve most matters. They worship the dual nature Enkai. He has the benevolent side – “Black God” and the “Red God” which is vengeful. The central figure in their tribe is the Laibon, which is a type of Shaman.

Traditional Maasai lifestyle center around their cattle which is their primary source of food. A man’s wealth is measured by cattle and children. A herd of 50 cattle is respectable, and the more children the better. A man who has an abundance of one but not the other is considered to be poor. 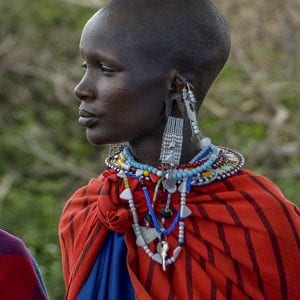 Traditionally, the Maasai diet consisted of raw meat, raw milk, and raw blood from cattle and some vegetables and fruits, although in many villages they do not eat any fruit or vegetables at all. They consume cow’s milk and a solid maize porridge known as Ugali. Animal fats or butter are used in cooking.

The Maasai have been studied for their diet. 400 young male Maasai were given an Electrocardiogram test. They found no evidence whatsoever of heart disease, abnormalities or malfunction. Further studies have shown that the average cholesterol level was about half of that of an average American.

Soups are probably the most important use of plants for food by Maasai. The Acacia is the most frequently used soup plant. The root or stem bark is boiled in water and drunk alone or added to soup. The Maasai are fond of taking this as a drug and is known to make them energetic, aggressive and fearless. Maasai eat soup laced with bitter bark and roots containing cholesterol-lowering saponins. Maasai who don’t have access to the bitter plants tend to develop heart disease. Although consumed as snacks, fruits constitute a major part of the food ingested by women and children as they tend to their chores.

The central unit of Maasai society is the age-set. Around age five, the boys are sent out all day to tend to the cattle, sheep and goats. Girls are responsible for chores such as cooking and milking, skills which they learn from their mothers at an early age. 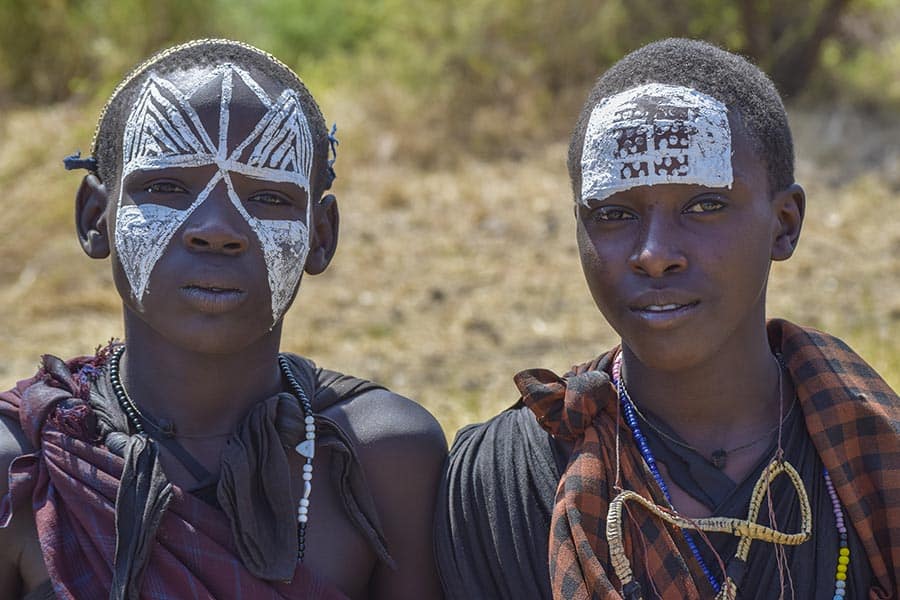 As the boys reach puberty, they go through the ancient ritual of circumcision. This ritual is typically performed by the elders, who use a dull knife and makeshift cattle hide bandages for the procedure. In modern times, boys living close to towns with doctors may endure the ceremony in safer conditions, but still without Anesthetic because they must endure the pain that will lead them to manhood. The healing process will take 3–4 months. They must remain in black clothes and painted faces for a period of 4–8 months.

During this period, the newly circumcised young men will live in a Manyatta, a village built by their mothers. The Manyatta has no encircling stick fences for protection. This is to symbolize the warrior role of protecting the community. No inner corral is built either since warriors do not own cattle or care for the livestock.

The warriors spend most of their time walking through the Maasai lands, beyond the confines of their tribal boundaries. They are also much more involved in cattle trading than they used to be. They develop and improve basic stock through bartering rather than just stealing them as they did in the past.

Young women were also excision or had a “circumcision” as part of an elaborate rite of passage ritual called Emuratare. This ceremony initiated young Maasai girls into adulthood through ritual circumcision and then into early arranged marriages. The Maasai believed that female circumcisions were necessary and Maasai men may reject any woman who had not undergone it as unworthy to marry or for a reduced dowry.

Similar to the young men, women who have gone through this ritual wear dark clothing, paint their faces and then cover their faces once the ceremony concluded. It has recently been replaced in some instances by a “cutting with words” ceremony involving singing and dancing in place of the mutilation. Today, Female genital cutting is illegal in both Kenya and Tanzania.

One myth about the Maasai is that each young man is supposed to kill a lion before he is circumcised. Lion hunting was an activity of the past, it has been banned in Southeast Africa. Yet lions are still hunted when they maul Maasai livestock. Young warriors who engage in traditional lion killing do not face significant consequences. Increasing concern regarding lion populations has given rise to at least one program which promotes accepting compensation rather than killing them. Nevertheless, killing a lion gives one great value and celebrity status in the community.

As a historically nomadic people, the Maasai have traditionally relied on found materials to construct their housing. The traditional Maasai house was in the first instance designed for people on the move and was thus very impermanent in nature. Their house called a Bomba is either somewhat rectangular shaped with extensions or circular and are constructed by women. The structural framework is formed of timber buried in the ground. These poles are then interwoven with a lattice of small branches, then covered in mud plaster. They use cow dung to waterproof the roof. The dwelling is small, measuring about 9 x 15 feet and about 5 feet high. Within this space, the family cooks, eats, sleeps and stores food and other possessions. Small livestock is also found within the house. Villages are enclosed in a circular wooden fence called an Enkang. They are built by the men, usually of thorned acacia, a native tree. At night, all cows, goats, and sheep are placed in a corral in the center, safe from predators. 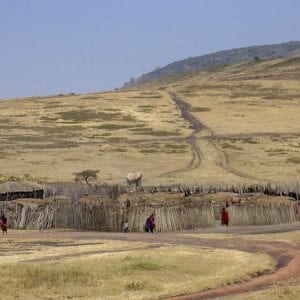 The piercing and stretching of earlobes are common among the Maasai as with other tribes. Various materials have been used to both pierce and stretch the lobes, including thorns for piercing, twigs, bundles of twigs, stones and the cross section of elephant tusks. Fewer and fewer Maasai, particularly boys, follow this custom. Women wear various forms of beaded ornaments in both the ear lobe and smaller piercings at the top of the ear.

The emerging forms of employment among the Maasai people include farming and wage employment such as security guards, waiters and tourist guides. They also find income by other various forms of business. Such as selling traditional medicine, running restaurants and shops, selling milk and milk products and selling minerals, embroideries and jewelry. The Maasai are known for their intricate jewelry. For decades, they have sold these items to tourists. On your way to the safari parks, you will see and may even stop at the Maasai tourist villages. These villages are easy to find since they are surrounded by stick fences to keep out the predators. Several of these villages even allow tourists to rent a hut for the night.

Many Maasai have also moved away from the nomadic life to positions in commerce and government.

Over the years, many projects have been implemented to help Maasai tribal leaders find ways to balance their traditions with the educational needs of their children, food sources, and employment. It is important to note that many of their rituals have been eroding due to outside influences.

The Maasai believe that it takes one day to destroy a house; to build a new house will take months and perhaps years. If they abandon their way of life to construct a new one, it will take thousands of years.