The Great Serengeti Migration is the constant journey of vast numbers of wildebeest herds. This herd is accompanied by large numbers of zebra, Grant’s gazelle, Thomson’s gazelle, eland and impala. This annual migration is fairly predictable. It does vary slightly from year to year depending on herd size, grass for grazing and available water. The herd moves in a clockwise pattern. Since they are constantly moving, there is no starting point. However, from December until March, it is in the Southern Plains so we will start there.

The rainy season usually begins in October. At this time the herd migrates south to the Southern Plains. From December until March the herd roams the plains of the Serengeti and the Ngorongoro Conservation Area. Toward the end of February, there is a two-week window where they give birth to offspring. In March it begins it’s journey to the northwest. The rainy season continues until May. The days begin as sunny and warm, but by the afternoon the rains move in. The rainy season peaks in April and visiting the Serengeti during this month is not advisable since most camps become muddy quagmires and the roads are impassable.

When the rains end in May the wildebeest continue their migration to Kenya’s Maasai Mara. Some go north across the Seronera Valley. Others move up through the Western Corridor. Along the way, they are hunted by many predators. The biggest threat is the Serengeti lions—there are over 3,000 at the last count. They are also hunted by Leopards, cheetahs and hyena clans. In July and August, the herd begins to head north toward the Kenya border. It spreads out from across the heart of the Serengeti to as far as the Ikorongo area.

In September the horde runs into another more serious obstacle—The Mara River. This river rages down from the Maasai Mara Game Reserve and the pack attempts many times to cross it. Usually accompanied with mass panic and confusion. Once across, the herd enjoys the grazing on the Kenyan side of the border.

By October, as the rains begin, the wildebeest herd is on the move again, this time with more purpose. It continues its journey to the south, going through western Loliondo and the Serengeti National Park’s Lobo area. By the end of November, it returns to the green shoots which follow the rains on the grassy plains of the southern Serengeti until it begins the migration in the spring. 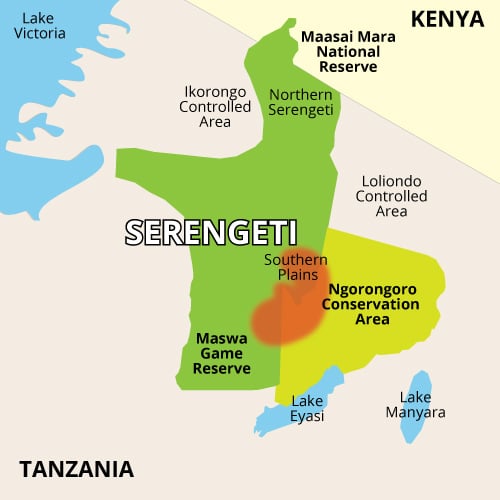 The herds spread out to graze across the southern plains of the Serengeti and parts of the Ngorongoro Conservation Area. Post Views: 0 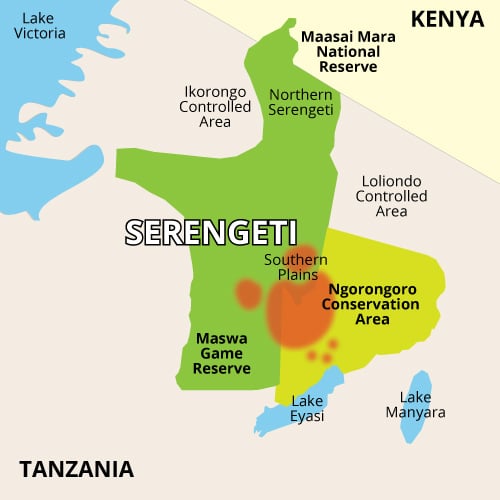 The herd spreads out across the short grassy plains. Most of them calf in a 2-3 week window. Post Views: 0 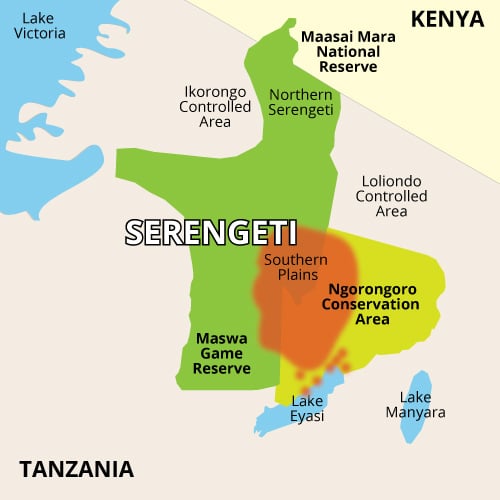 The herd is still spread over the short grassy plains of the southern Serengeti, Loliondo and the Ngorongoro Conservation Area Post Views: 0 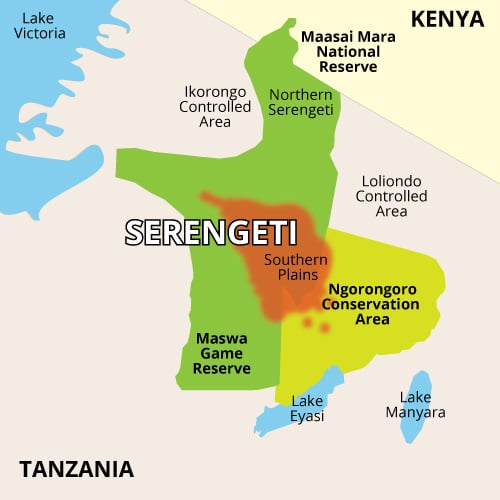 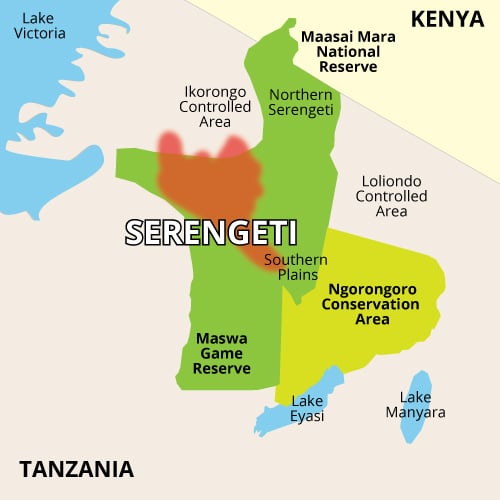 The migration heads north through Seronera towards the Western Corridor Post Views: 0 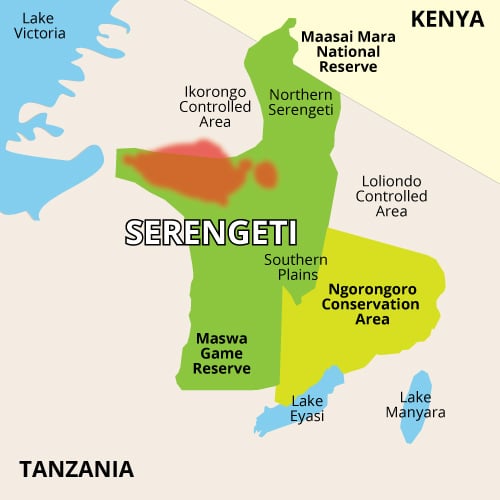 The herds mass in the western corridor. They bunch up before crossing the Grumeti River. Post Views: 0 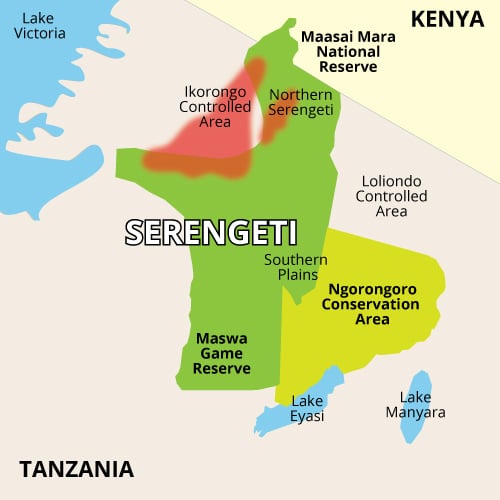 Some of the herd heads across the Grumeti river and through Grumeti Reserve; others head north into the Serengeti Post Views: 0 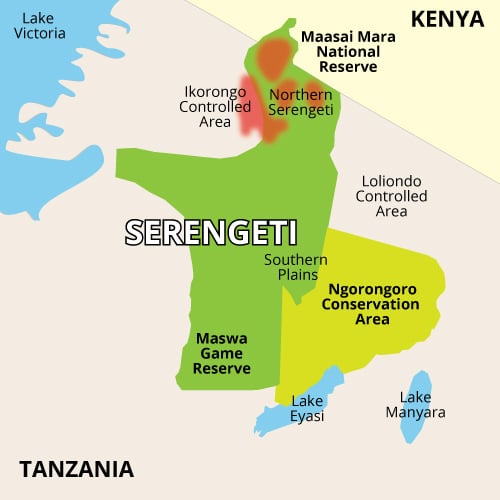 The herds pass through Ikorongo and into the far northwestern section of the Serengeti Post Views: 0 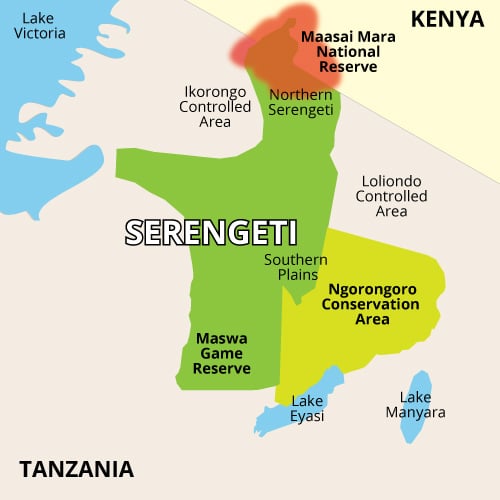 The herd is now at the northern end of the Serengeti National Park and in Kenya’s Maasai Mara National Reserve. Post Views: 0 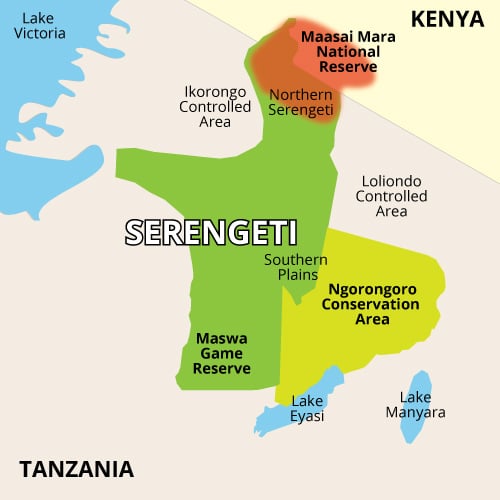 The herd continues grazing in the far north of the Serengeti and into Maasai Mara National Reserve. Post Views: 0 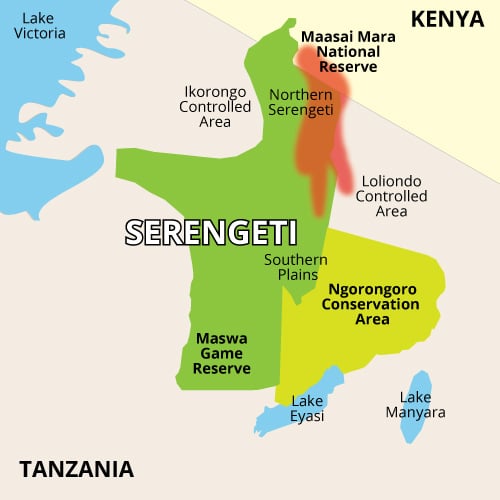 The herd begins moving south through Loliondo and down the east side of the Serengeti National Park Post Views: 0 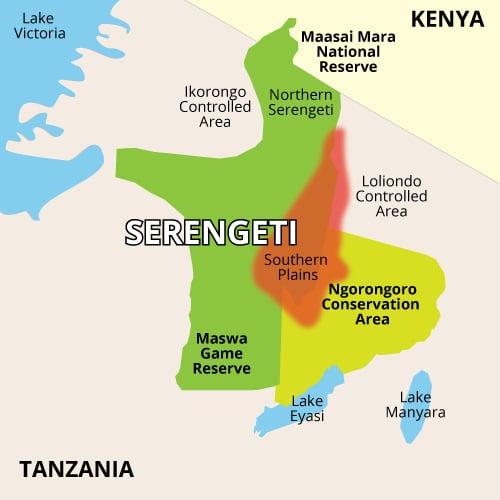 The herd arrives on the east side of the short grass Southern Plains just in time for the rainy season. Post Views: 0