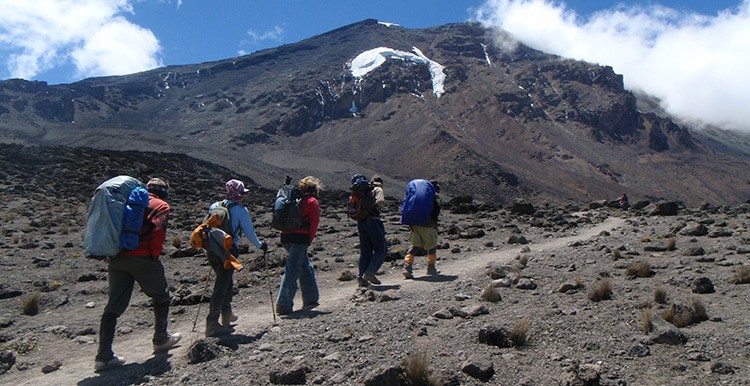 Why should I climb Kilimanjaro, why not another mountain? What is so special about Mount Kilimanjaro? To answer these questions we have to take a look at caused Kilimanjaro to become a mountain in the first place.

Kilimanjaro is different than most other mountains on Earth. It was created by three ancient volcanoes. Two of these volcanos are now dormant—they could still erupt—and one is extinct. These three volcanoes form what is now Kilimanjaro the highest free-standing mountain in Africa. It stands at 19,341 ft.

Kilimanjaro was first discovered by the Europeans in the 1840’s because everyone knows that it doesn’t exist until someone “discovers” it. Many attempts were made to reach its summit, Uhuru Peak. This feat wasn’t completed until a German geologist, Hans Meyer, accomplished it in 1889. Only the most serious of climbers and scientists even attempted to summit this majestic peak whose glaciers and foul weather thwarted even the most intrepid of adventurers.

Over the next hundred years, the weather on Kilimanjaro changed and the approximately 1,400-year-old ice-field retreated significantly. In fact, the ice has been disappearing so quickly that scientists believe it could be gone entirely by 2060 or sooner. The effects of this climate change have yet to be felt. There is one major thing that the ice-melt has already made possible, tourism. Every year, an estimated 35,000 people from all over the globe visit Tanzania in an attempt to climb Kilimanjaro. And thousands of those people go home without reaching the summit. They either suffer from altitude sickness, get hypothermia, simply lack the willpower, or worse, die.

So why do they do it? More importantly, should you attempt it? Everyone’s reason is different, however, there are some similarities.

It is probably not a surprise that climbing Kilimanjaro is on many outdoor enthusiasts bucket list. The reason for this lack of surprise is the simple fact that people like a challenge. Accepting a challenge is a major part of everyone’s life. Things like earning a college degree, landing a great job, buying a house – they’re things we can all relate to. For example, marriage is a big goal for many people, but that’s not the end of the road; now you’ve got the rest of your life to keep the relationship together, so at what point can you say, “I did it,”? Climbing a mountain is a distinct achievement – either you did it or you didn’t. So why Kilimanjaro? The U.S. has tons of mountains which are easily accessible by Americans, provide great views, don’t require tour operators, and are a lot less expensive to get to. Every continent has its fair share of climbable mountains. But they’re not Kilimanjaro. They’re not special, or at least not in the same ways.

I think that it is that Kilimanjaro stands alone, that it is in Africa and has an almost magical draw to it. It isn’t just another tall mountain in a range of tall mountains. It towers over the Tanzanian plains almost daring you to reach its summit. Mount Whitney is an amazing peak but it is next to many other amazing peaks. Does climbing Whitney take you through a rainforest, scrubland, and glacier territory?

But that is just the unique facts about Kilimanjaro. There is more to it than that. If you searched the internet for ‘Kilimanjaro,’ you get back facts about Kilimanjaro or your get blogs from people who have climbed it. They consistently talk about how difficult it was, how they had to face their inner demons to reach the summit, and how it forever changed their lives. People get perspective from climbing Kilimanjaro, even if they didn’t make it to the summit.

In today’s age, it’s rare for the average person to be to be in real danger by being in the outdoors. Kilimanjaro is a real threat, from the terrain to the altitude sickness, a threat that is unpredictable. Around 10 people die on its slopes every year. When you are sitting at your desk reading this that doesn’t seem scary, just a statistic, but when you are on the mountain it is a real threat. Your hometown mountain probably doesn’t require you to walk three to five days at a very slow pace just to reach the summit, or constantly monitor yourself and your group for symptoms of altitude sickness. You probably don’t have to get up to use the bathroom three times a night because your body is having difficulty adjusting to the altitude. Mental and emotional breakdowns are common, people just give up before reaching the summit and have to be escorted back down. The mental side of the battle is just as important as the physical, and according to many previous climbers, even more so.

But for all the difficulty, expenses, and danger, most climbers wouldn’t trade their experiences climbing Kilimanjaro for the world. The life lessons that are taken away from a Kilimanjaro climb are as varied as the people who have climbed it. Simply put, it truly is the climb of a lifetime.