The weather on Kilimanjaro is divided into two seasons. The wet season (rainy) and the dry season (not rainy). The dry season, for obvious reasons, is the best time to climb Kilimanjaro. So why are there only two seasons? 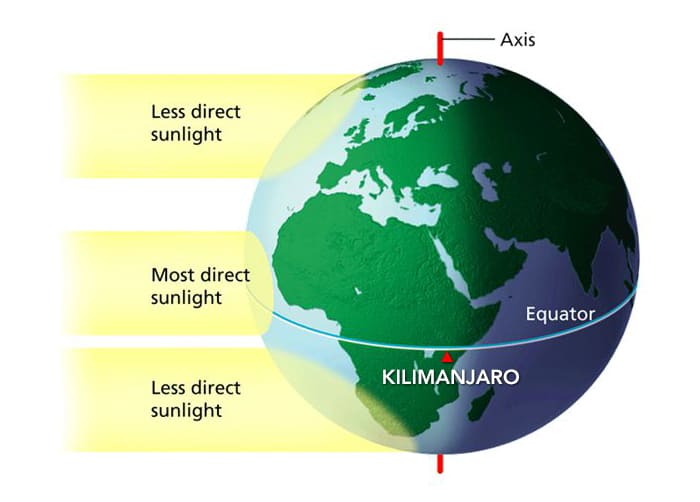 Kilimanjaro is located very near the equator so having four seasons is not possible. Generally, the further away from the equator, the cooler the winter and summer temperatures. At the equator, there are no seasons because each day the Sun strikes at about the same angle. Every day of the year the equator receives about 12 hours of sunlight.

Best Times to Book Your Climb

When are the best times of year to book a climb on Kilimanjaro? Peak Planet Recommends January-February and July-October as the best months to climb Kilimanjaro.  However, if you don’t mind a little rain and clouds you can book your trip for June, December and the beginning of  March. Peak Planet doesn’t book group climbs in April, May or November since those months are the rainy seasons.

If you are an experienced backpacker and don’t mind a little rain. Booking a private climb during these times has its benefits. There are very few people on the mountain so you’ll feel like you have the entire mountain to yourself.  We recommend the Northern Route since it receives less rainfall on the north side of Kilimanjaro.  We also recommend the Marangu route since you’ll sleep in huts instead of tents.

You can see the best times to book your trip on the chart below.

There are also several climbs throughout the year that have a full moon. Since you’ll be climbing at night this gives you a great opportunity to climb without a headlamp and with just the light of the moon. You can view the treks that have a full moon during the climb on our Dates and Prices Page. Look for the climbs marked with the full moon.

Check out the graphs below to see the temperatures by month and the rainfall by month on Kilimanjaro. Click here to read more about the trekking temperatures.

WET DAYS PER MONTH ON KILIMANJARO

Want to see the current weather conditions on Mount Kilimanjaro? Click the button below.