What is the best route to climb Kilimanjaro? This is a very important question to ask yourself when planning your Kilimanjaro climb. Kilimanjaro has several routes to get to its summit. Depending on which one you choose can make or break your attempt to make it to the top. Peak Planet offers several routes to the roof of Africa. There are even a few we don’t offer. We recommend two over the others. But several of them are good routes. Continue reading to find out the best routes and the routes we do not offer. 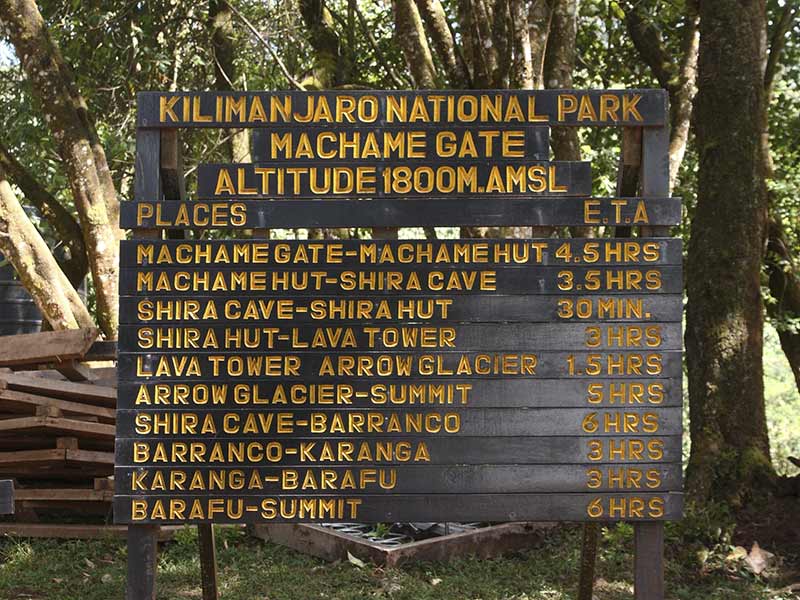 First of all, what are the routes to the top of Kilimanjaro? The common routes are the Shira, Umbwe, Marangu, Rongai, Machame, Northern Circuit, and Lemosho.

Additionally, there are variations or combinations of these routes such as the Spiral route or the Northern Crater route. Some companies call routes by other names. Like the Northern Circuit route which is sometimes referred to as the Grand Traverse.

What Kilimanjaro routes do we not guide? Keep reading to find out.

First of all, let’s start with the Shira route. Also known as the Shira Plateau route. The Shira route has trekkers start by riding in a vehicle to the gate above the rainforest. The trailhead begins at 11,800 ft. This is more than 2,000 ft higher than the Lemosho Gate. So you are already starting out with less time to acclimate to the elevation. Secondly, you miss out on the beautiful rainforest.

The Umbwe route is considered the most difficult route to the summit. The route is very steep, you to gain altitude very quickly. This also does not allow your body time to acclimate. Some say it is the best-kept secret on the mountain. We say, forget it. Isn’t summiting the reason you came all this way? Why make your odds of making the summit less than 50% by climbing the Umbwe route.

The Marangu route, nicknamed the Coca-Cola route, is the only route that goes up and down on the same trail. This makes it the most crowded trail. Because of the crowds, we only guide the Marangu route as a private climb. It is eight days, which is six days on the mountain. However, just because it isn’t our favorite route, doesn’t mean it isn’t a route you should just ignore. It does have its benefits. We recommend climbing this route if you do not want to sleep in a tent on an inflatable pad. Or if you can only climb during the rainy season. Why is that? Because the Marangu Route is the only route where you’ll sleep in huts.

The Rongai route is a popular route and can be booked as an 8-day group or 8 or 9-day private climb. It receives less rainfall being on the Northeast side. It is an alternative to the Marangu route during the rainy season and is a good route for those who don’t have as much time.

The Rongai route is a more gradual ascent. Therefore, it is preferred by those with little or no backpacking experience. However, it is equally enjoyable for even the most hardened trekkers. For the 9-day Rongai, an additional acclimatization day on Day five is added. During this day, you will do an additional acclimatization hike around and up to the saddle towards Camel’s Back.

The Machame, or Whiskey route,  is the most popular route on Mount Kilimanjaro. The trek begins at Machame Gate, located at the southern base of the mountain. Then continues through the rainforest. The 9 day Machame route is recommended over the 8-day route because it provides an additional acclimatization day and shortens some of the daily hikes. The total time on the mountain is 7 days.

All companies guide it. It is also a more aggressive route, gaining elevation quickly at the start. However, not as quickly as the Umbwe route. We offer a 9-day group climb and an 8 or 9-day private climb. The Lemosho joins the Machame route near Lava Tower.

The Northern Circuit Route, also know as the Grand Traverse, is the most amazing journey on Kilimanjaro. This is a relatively new route. On this route, you’ll enjoy the Northern Circuit’s tranquility and stunning panoramic scenery. The route starts from the west, along with the Lemosho route. Near Lava Tower, it departs the Lemosho route and circles clockwise around the north side of Kilimanjaro. This is the only route that goes along the north side. It traverses nearly the entire mountain before summiting from the east side. This is absolutely the most scenic path available and has almost no traffic on its northern face. The total time on the mountain is 9 days.

We offer an 11-day group climb or private climb.

The Lemosho route is our most popular route. It starts along with the Northern route at the Lemosho gate then joins the Machame route at Lava Tower. It also has the infamous Barranco wall. We offer a 9 or 10-day private climb and a 10-day group climb.

The Lemosho route is regarded as one of the prettiest routes on Kilimanjaro. It starts from the west side of the mountain. You will trek through the lush rainforest until you reach the wildflowers of the Heath ecosystem. After the rainforest, you will cross one of most beautiful areas on Kilimanjaro, the Shira Plateau, before traversing the mountain along the southern circuit.

The total time on the mountain is 8 days. We recommend hiking the 10-day Lemosho route as it provides plenty of time for acclimatization and it also keeps the daily hiking distances very reasonable.

All the routes have their pros and cons. However, there are two routes that we recommend. We recommend them for several reasons.

The first is the 10-day Lemosho route due to it having fewer people, spectacular views and a more than 90% success rate.

The second route is the 11-day Northern route. Like we mentioned above, it has amazing views. It also has an over 90% success rate and it has the fewest number of climbers.

In the end, whatever route you choose is really up to you. Just make sure you pick the right operator to get you to the summit and back down safely.