How long does it take to climb Mount Kilimanjaro? This depends on which route you take. The summit has seven established routes. They are the Marangu, Machame, Lemosho, Shira, Rongai, Northern Circuit, and Umbwe. Technically, there are eight, with Mweka being the eighth. But it is now only used for descending the mountain. Peak Planet guides five of them. We build in an arrival and departure day to all of our climbs so for example, when we say 8 days, it is actually 6 days on the Mountain and 9 days, is 7 days and so on. 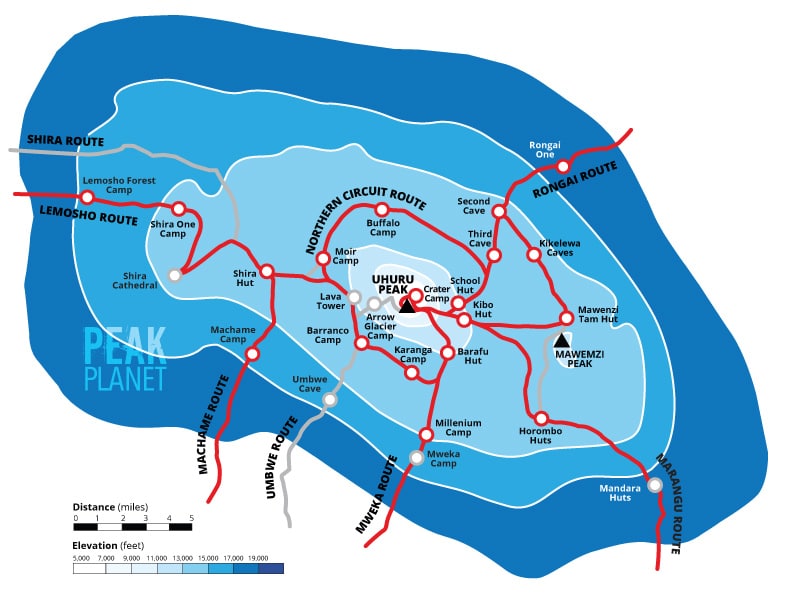 Peak Planet does not guide the Shira and Umbwe routes. We do not guide the Shira route for a couple of reasons. First of all, you begin your trek by driving above the rainforest. By doing this you miss the scenery. Secondly, you drive to the Shira Gate which is at 11,800 ft. This does not allow for your body to acclimate as well.

The Umbwe route is considered the most difficult route so we do not guide it. There are only a few people that do this route since you gain altitude very quickly. Because of this, the summit success rate is very low.

The Marangu route is the only route that goes up and down on the same trail. Since you are on the same trail both ways the route is crowded and the least scenic. Peak Plant only guides this route as an 8-day private climb and we recommend this route if you climb during the rainy season—fewer people. It is also the only route that has climbers sleeping in huts. This avoids sleeping on the potentially wet ground.

The Rongai route is a popular route and can be booked as an 8-day group or 8 or 9-day private climb. It receives less rainfall being on the Northeast side. It is a good route for those with fewer days to spend.

The Machame route is the most popular route on Mount Kilimanjaro. All companies guide it. It is also a more aggressive route, gaining elevation quickly. It joins with Lemosho Route near Lava Tower. We offer an 9-day group climb and an 8 or 9-day private climb.

The Northern Circuit route is the newest route on Mount Kilimanjaro. It begins with the Lemosho route then leaves the Lemosho and heads north near Lava Tower. It is the only route on the North side so you feel like you are almost alone. We offer an 11-day group climb or private climb. We highly recommend this route if you have the time.

Lemosho is our most popular route. It has an over 90% success rate and fewer people. We feel it is the most scenic as well. We offer a 9 or 10-day private climb and a 10-day group climb.

Although technically not a separate route, we need to mention the Northern Crater route. This route follows the Northern Circuit route with an additional day spent at Crater Camp after the summit. We only offer a 12-day private climb since it is dangerous to sleep at this high of an elevation.

Finally, how long it takes to climb Mount Kilimanjaro is directly related to how much time you have and which route you choose. As a result, whichever Peak Planet route you decide on, know you will be climbing with the best guides on Mount Kilimanjaro.